Check out the Spotify Playlist for our Summer Concert Series 2022

We are excited to host our second outdoor summer concert series on our beautiful farm.

This year we have a wonderful lineup and are looking forward to sharing this music with our community! Bring a blanket and picnic, and relax in the summer evening with friends and family. We are delighted to be featuring our own Sweet Land Farm Cellars Rosé and Cider. There will not be dinner for sale this season so you are invited to bring your own food. We are excited to offer a delicious dessert by Sara May.

*kids under 10 come for free

*rain dates will be arranged if needed

*No outside beverages please 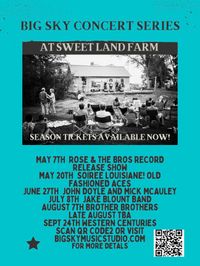 Please consider purchasing a ticket to the full concert series. This is a great way to support the series, and will help us provide a guarantee for these out of town musicians

Jake Blount is an award-winning musician and scholar based in Providence, RI. He is half of the internationally touring duo Tui, a 2020 recipient of the Steve Martin Banjo Prize, and a two-time winner of the Appalachian String Band Music Festival (better known as Clifftop). A specialist in the early folk music of Black Americans, Blount is a skilled performer of spirituals, blues and string band repertoire. Blount has performed at the Kennedy Center, the Newport Folk Festival, and numerous other venues across and beyond the United States. He has presented his scholarly work at museums and universities including the Smithsonian Institution, Berklee College of Music and Yale University. His writing has appeared in Paste Magazine, No Depression, and NPR.

The Brother Brothers are the indie folk duo of Adam and David Moss. The identical twins were born and raised in Peoria, Illinois and originally based in Brooklyn, but have been ultimately and profoundly shaped by indiscriminate rambling. They are the kind of people who have a story about everything, and moreso, one you might genuinely like to hear.

Soon to be touring a covers record aptly named “Cover to Cover,” their 3rd release on compass records is a requisite album of covers, inspired by an inward reflection of the roots of their inspiration during a time of great uncertainty and creative insecurity. “When you’re not quite sure what to say, why not say what someone else said, but say it in your voice.” The Brother Brothers sing from the heart no matter who’s words they're using. The message may be the same, but when you find one to amplify, “why not say it again?”

The brothers called in some good old friends to play on the album, including Rachael Price (Lake Street Dive), Sarah Jarosz, Michaela Anne, Alison Brown, and hired some of nashville’s finest session musicians, namely Jeff Picker (Ricky Skaggs), Matthew Meyer, Ryan Scott and Michael Rinne. American Songwriter once said, “no matter what musical context Adam and David Moss may come to put themselves in, what the duo want to say through music will always come to show the beauty that exists—even in the deepest cracks—of human living." Proclaims No Depression, “the warm harmonies and silky melodies of identical twins David and Adam Moss evoke the kind of ’60s-era folk tunes that reverberated through dark, wood-paneled bars in the Village… If these brothers aren’t among the Americana Music Association’s nominees for Emerging Artist or Duo-Group, I want a recount.”

In an age when independence is idolized and every person seems to be seeking their own lone wolf career path, Seattle-based roots band Western Centuries believes that the way forward is better together. Collaboration, inspiration and mutual admiration are what Cahalen Morrison, Ethan Lawton, and Jim Miller cite as the heart of their project. Western Centuries celebrates their third album as a “band’s band” with the release of Call the Captain, (a tongue-in-cheek reference to the band’s lack of hierarchy). Unsurprisingly for such an egalitarian outfit, the collection offers harsh criticism of dogmatic belief systems, all while leading by example with a unique, genre-defying sound.

Morrison and Lawton met in Seattle, where Morrison was playing primarily as part of acoustic duo Cahalen Morrison & Eli West, and Lawton was working with Zoe Muth and the Lost High Rollers. The two began playing together casually, and bonded over their love for a few Dirk Powell records which featured Jim Miller’s singing. When they heard that Miller had moved to Seattle they made a point to connect with him and the three found a shared artistic outlook as well as a burgeoning friendship. Each an established musician in his own right, Morrison, Lawton and Miller (a founding member of roots-jam band Donna the Buffalo) share lead singer and songwriter duties, while swapping instruments onstage with ease. “I had been in Donna the Buffalo for 20 years and my role in that was rhythm guitar and harmony singing,” says Miller. “I didn’t want to be the backup dude anymore. My thought was, if I’m gonna’ do this, I want to contribute to the material in a more meaningful way.” Thus, Western Centuries was born—a band without a leader; a ship without a captain.